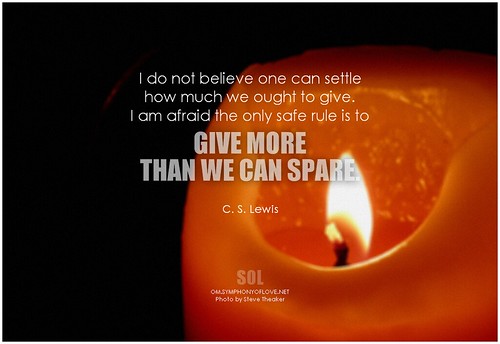 In a new book (The Art of Dying Well)  I’m reading about getting older, author Katy Butler asked a question that prompted me to do some thinking: “Have you mostly been a ‘taker,’ an ‘exchanger,’ or a ‘giver’?” Most of us I would think have one we would like to claim and one we hope doesn’t describe us.

Prior to reading Butler’s question, I don’t think I’d ever heard or thought about the idea of being an exchanger. Her definition of an exchanger is “one who keeps track and returns favors.” Of course all of us have done a lot of exchanging good deeds and help with others, but I doubt as Christians we have kept track of such things.

What most unsettles me about Butler’s question is the idea that some have mostly been takers. I’m sure it is true with some, but it is an ugly word. I would think no Christian would want to be called a taker only. But to be fair with Butler, I don’t think she meant by taker how most of us would understand it.

Rather than using the word taker, I’m more inclined to use either receiver or acceptor. And I would hope we all would be gracious and grateful receivers and acceptors. My sense is that our response to what someone gives us determines whether we are takers or acceptors. As I reflect back on my teenage years I am sorry I wasn’t more grateful and gracious with regard to everything my parents did for me and gave to me. If taker is an ugly word, so also is ungrateful.

Of the three possible answers Butler gives us to choose from, most of us would like to say we have mostly been givers. That does not rule out that we have been exchangers and receivers, only that we have also been givers. As I read Butler’s reflection I could not help but be reminded of what the Apostle Paul quoted from Jesus in Acts 20:35, ‘It is more blessed to give than to receive.’ All of us have been blessed by both, haven’t we? I have one more thought on being givers. When we give, and those to whom we have given thank us, don’t discount their gratitude by telling them something along the lines of “it wasn’t a big deal.”

I’m thinking all of us are interdependent in a variety of ways. How would you answer the question, “Have you mostly been a ‘taker,’ an ‘exchanger,’ or a ‘giver’?”

2 thoughts on “HOW WOULD YOU ANSWER?”