While exiting the freeway recently a driver on the road I was entering ignored the yield sign and almost hit me.  I wasn’t happy, but to my credit I did not honk my horn or glare at the other driver. As I moved into my lane behind him it occurred to me that on previous occasions I have done the exact same thing. I had to call myself on what was clearly a double standard. If he should have yielded to me (and he should have), then I also should have yielded at other times when the roles were reversed.

What reminded me of my inconsistency was a line in Gordon Smith’s short new book Teach Us to Pray, “it is so easy to spend our energy frustrated with others and wishing that others would change” (p. 15). His point is that we think about how others need to change, while we give ourselves a pass on the very same things. That’s what is called a double standard; and I confess I’m guilty. (By the way, if you are interested, Smith has an excellent chapter on “The Prayer of Confession” in the book.)

The greatest and most creative teaching about a double standard is given by Jesus in the Sermon on the Mount (Matthew 7:3 and 4): “And why worry about a speck in your friend’s eye when you have a log in your own? How can you think of saying to your friend, ‘Let me help you get rid of that speck in your eye,’ when you can’t see past the log in your own eye?” Again, I am guilty.

In the next chapter in his book Smith further convicted me with an unintended paraphrase of Jesus’ words, “We are so easily aware of the shortcomings of others rather than our own faults” (p. 22). Wouldn’t you agree that is pretty much what Jesus said?

For me, the most stinging part of Jesus’ teaching in Matthew 7:5 is the designation of the person with one standard for self and another for others a “hypocrite.” I think we can agree that Smith too is describing a hypocrite.

I do not believe either Jesus or Gordon Smith are suggesting we ignore the shortcomings or faults of others. The call is not to judge others while giving ourselves a pass. That’s a double standard and it isn’t appropriate.

Does my confession, Smith’s observations, and Jesus’ teaching say anything to you?

Living close to and being involved with my two grandsons (ages 4 and 8) almost every day gives me the opportunity to do a lot of pretending. In recent weeks I’ve played the parts of Superheroes as well as a variety of “bad guys.” And it usually is a lot of fun.

Yesterday I read an interesting blog by Lance Witt entitled Image Management that sounds a lot like pretending to me. The difference, however, is that Image Management is neither a game nor fun. Witt’s primary intended audience is pastors and ministry leaders, but what he says is applicable to all Christians.

Those familiar with the New Testament no doubt are aware that Jesus’ primary issue with the Pharisees was what he called hypocrisy. They managed their images by pretending to be something they were not. What they projected to be on the outside by their actions did not match what they actually were on the inside.

Whether we are Christians or not, most of us know that pharisaism is not dead. As a matter of fact, chances are there is a little Pharisee inside all of us. To manage our images we sometimes struggle to let people know we really are not as good or as far along in our spiritual maturity as they think we are. Image management is not really management but deception.

By raising this subject I’m not suggesting that the thing for us to do is to become totally transparent with anyone and everyone in all our interactions with others. To refrain from pretending that we are better than we are, or that we have no problems, does not require us to publically “air our dirty laundry”.

I think what I am trying to say about this issue of image management or pretending is that we really need to work at being authentic. But again, to be authentic is not a call to total transparency.

When we give up pretending and become authentic we realize we have a new freedom. And that freedom opens the door and paves the way for us to actually make progress in what we want to become.

At the conclusion of his article Witt relates the honest words of a veteran Christian leader in his upper sixties: “The older I get the less concern I have with what I have or have not done and the more concern I have for what I have or have not become.” I’m in my late sixties and those are a couple of things I too would like to have less concern and more concern about.

By the way, pretending is not a bad thing — especially with grandchildren — as long everyone knows that we are just pretending. 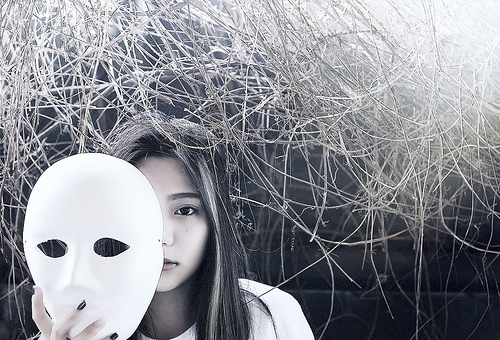 Being called a hypocrite by others is not a good thing, but it doesn’t seem quite so bad to call yourself one. In that light I am willing to acknowledge that at times I am a hypocrite. And I am fairly confident at times you are as well.

The designation hypocrite originally referred to an “actor” playing a role (holding up a mask) in Greek theater, but in our popular English usage it has a much different meaning. The way we use the word today comes from the way Jesus used it in His teaching. Hypocrites is what He repeatedly called the religious leaders of His day who constantly criticized Him. As a matter of fact, because of Jesus’ usage today Pharisee and hypocrite are synonymous as a negative designation for someone.

Hypocrite in Jesus’ usage and Christian usage today refers to someone who is acting as though he or she is much better and more holy than she or he really is.  A favorite example of this usage is in Matthew 6:1-18 when Jesus warns His followers “not to practice [their] righteousness in front of others to be seen by them.” He gives three specifics regarding not calling undue attention to one’s giving, not praying in public to be seen, and not going overboard to make it obvious when fasting “as the hypocrites do.” The basic idea is about motive and a call not to show off your righteousness with the purpose of being seen and applauded by others.

A second way Jesus used the word hypocrite was in connection with deception. In Matthew 22:15-22 there is an account of the Pharisees trying to trap Jesus with regard to whether or not the Jews should pay the imperial tax to Rome and Caesar. Before they asked Him the question they “buttered Him up” with flattery. Verse 18 reports “But Jesus, knowing their evil intent, said, ‘You hypocrites, why are you trying to trap me?’” In this exchange the issue seems to be deceit by pretending you are something you are not with the goal of doing damage to someone.

The third way Jesus used the word hypocrite is the best known usage and has to do with judging. In Matthew 7:3 and 4 Jesus asks, “Why do you look at the speck of sawdust in your brother’s eye and pay no attention to the plank in your own eye? How can you say to your brother, ‘Let me take the speck out of your eye,’ when all the time there is a plank in our own eye?” Then in verse 5 He uses our word: “You hypocrite, first take the plank out of your own eye, and then you will see clearly to remove the speck from your brother’s eye.” In this oft quoted teaching Jesus is forbidding the harsh judgement of others (remember in Matthew 7:1 He cautions, “Do not judge”), and especially with no awareness of or taking into account your own shortcomings.

In all honesty I don’t think I’m guilty of showing off my righteousness to be seen and approved by others. Nor am I aware of being deceitful by pretending I am something I am not with the goal of tricking someone. But when it comes to Jesus’ best known usage of the designation hypocrite I reluctantly admit there have probably been a few occasions in my life when I might have possibly judged someone harshly while not fully being aware of my own failing. Or to state it more succinctly—yes, I have certainly judged others when I shouldn’t have while being blind to my own sin. I hope we understand and will take seriously these important lessons from Jesus about not being hypocrites.

At the same time I am concerned that some Christians misunderstand and misapply the concept of hypocrisy. To avoid being a hypocrite does not mean you should or have to always be totally honest and forthcoming about what you think or believe. Sometimes we say things that hurt others we don’t really need to say. There are times in life when it is to our credit not to be absolutely transparent. I can’t tell you when those times are, but I can challenge you to realize that not always saying exactly what you think does not make you a hypocrite.

Think about these things and leave a reply below letting others and me know what you think. Also share this post with others on social media if you think it will be convicting and challenging.